Aurizon Holdings FY20 earnings beat expectations with EBIT of $910m, this was within the mid point of FY20 guidance of $880-930m.

FY21 EBIT guidance was 6% lower than consensus. Forward yield remains attractive at 5.%. Little in the way of EPS growth and a 100% dividend payout ratio provides a cap to the upside.

AZJ has initiated a new $300m on-market buyback which will help underpin the stock price. This is a good candidate for an at-the-money buy-write to drive portfolio cash flow.

Aurizon Holdings has been under Algo Engine sell conditions following the lower high formation at $5.00

Further downside price action is likely and yield support will build at $4.00 – $4.25. We’ll revisit AZJ once it trades into this range.

Aurizon Holdings is under Algo Engine buy conditions and is a current holding in our ASX 100 model portfolio.

Management guided earnings to be within $880 million – $930 million and with coal export data remaining strong, we’re comfortable with the forecast. 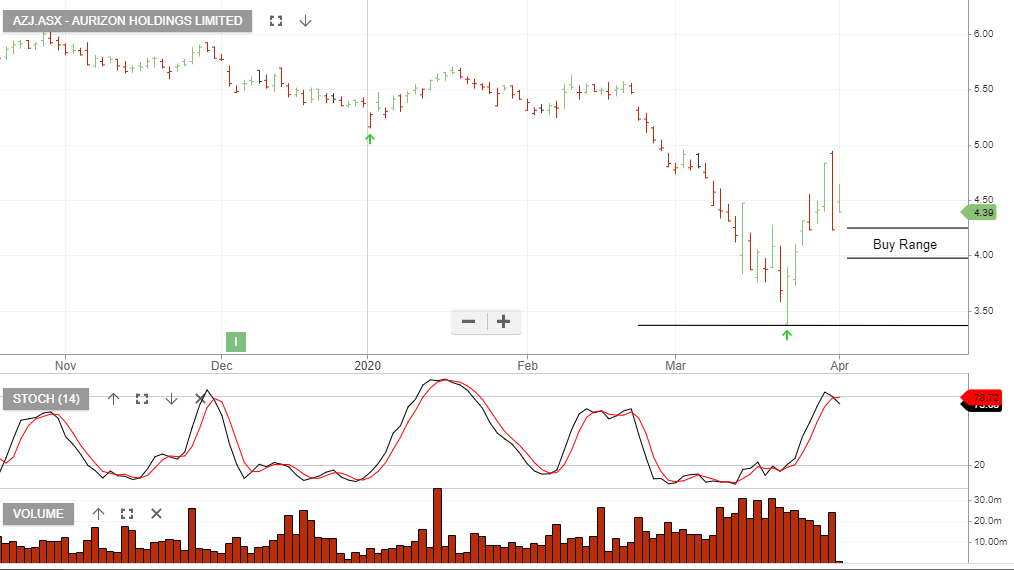 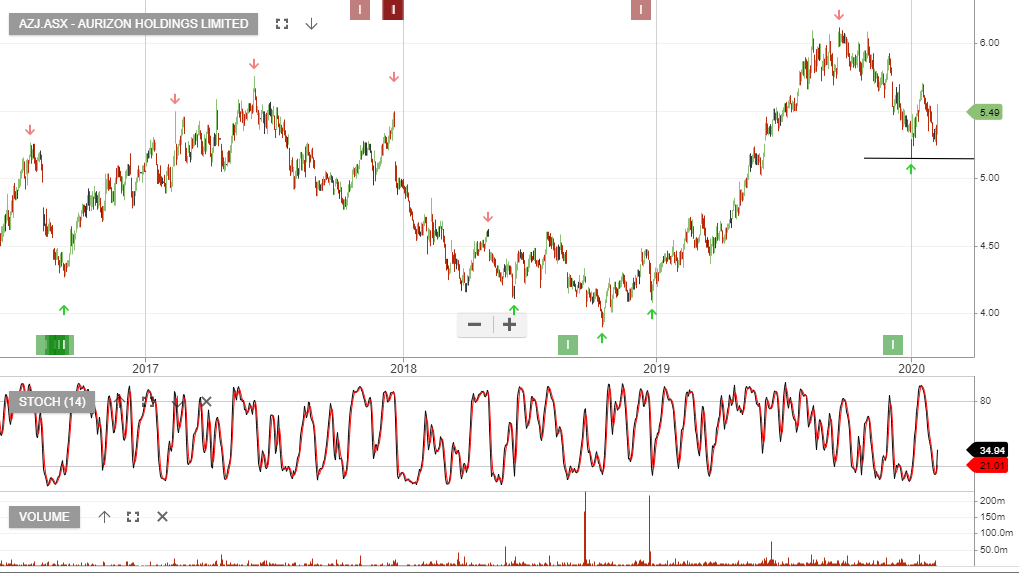 The share price is supported by a combination of the ongoing share buyback program and 100% dividend payout, which places the stock on a forward yield of 4.9%.

Aurizon Holdings is under Algo Engine buy conditions and is a current holding in our ASX 100 model portfolio.

Our ALGO engine triggered a buy signal for Aurizon Holdings on Tuesday at $4.24.

This “higher low” chart pattern is referenced to the low of $4.10 posted on June 13th.

AZJ’s FY2018 results, which were released last week, showed a modest 1% decrease in revenue from last year, but the underlying EBIT of $940 million was up 6% from 2017.

With a total dividend of 27 cents, the stock has an effective yield of 6% at current prices.

We expect the initial price target of $4.60 to be reached over the medium term. 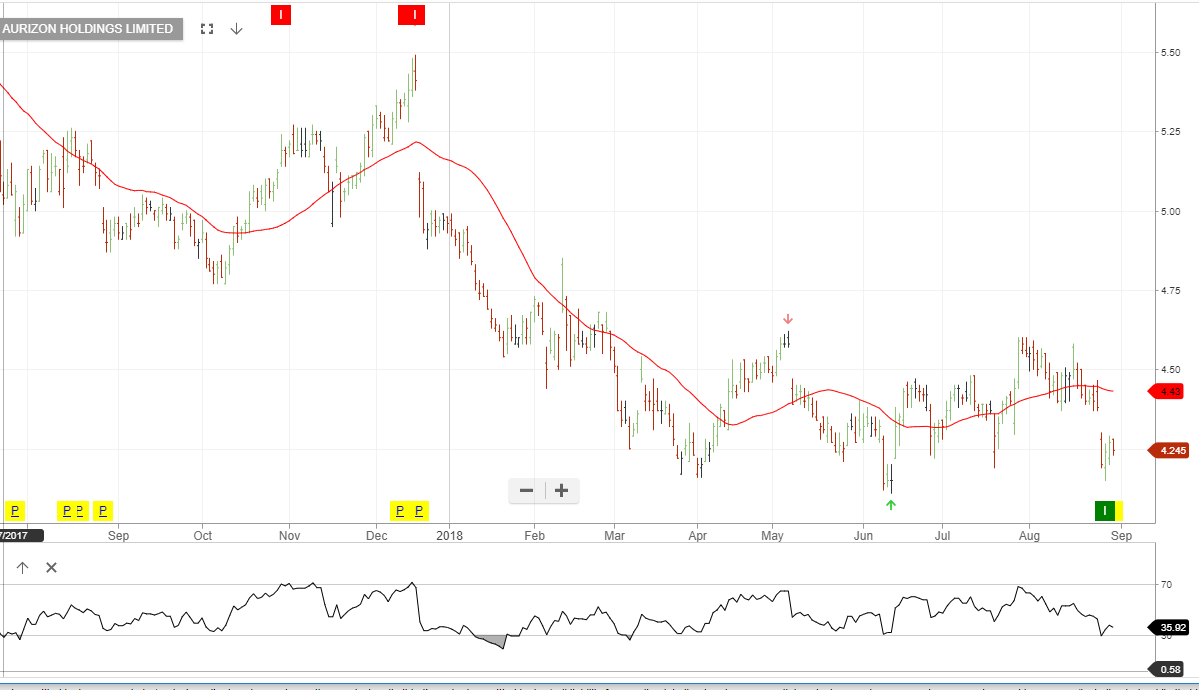 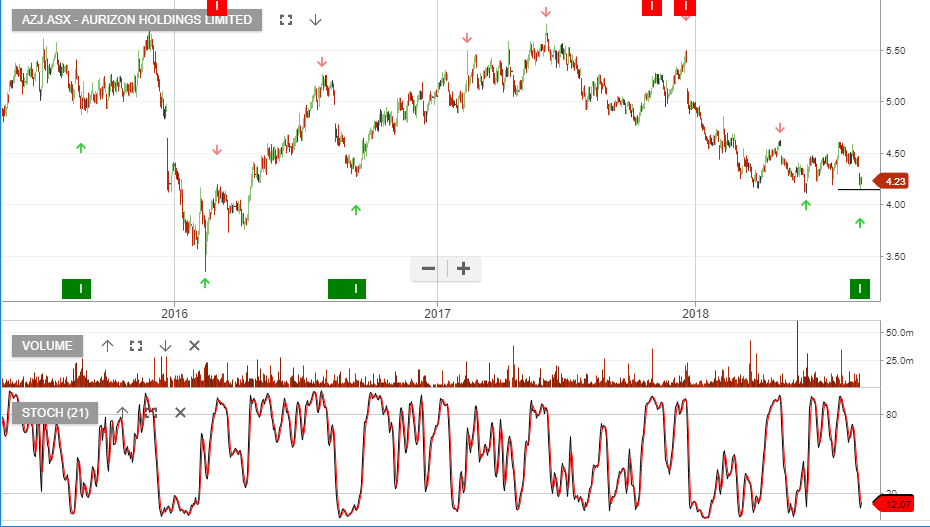 Our Algo Engine flagged the recent “lower high” structure in AZJ, and we’ve been highlighting the trade on the blog as one of our preferred shorts.

Our concern with AZJ, relates to the unsustainable payout ratio.

The downside momentum looks to be increasing for a move to the early October lows near $4.75.

Aurizon has made a lower high formation and we feel the recent rally from $4.75 to $5.30 will run into selling pressure. 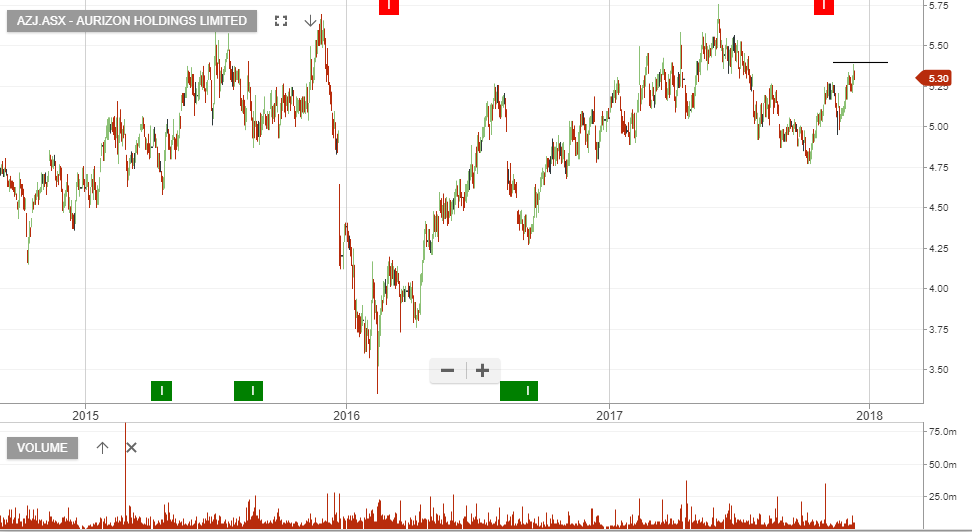