Out of the three healthcare buy recommendations, (CSL, SHL and RMD),   made in the blog post back on 13th of September, CSL has increased 10% and SHL 10%+, however, RMD has been slower to recover. With the recent price action in RMD, we’re now more confident that a basing pattern, (or reversal), is beginning to take shape. Therefore, today’s post acts as a reminder that a buy opportunity in RMD remains, with an upside target of $9.00+ 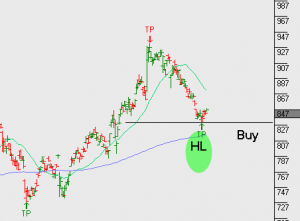 Oil Search (OSH.ASX) remains an attractive recovery story over the next few months with a potential price target back above $7.25. This target is seen as full value and profit should be taken at this point.

The $6.30 entry level was highlighted in the monthly strategy recording and again in yesterdays mid-week video update.

The current driver of oil prices is yesterdays announcement that OPEC reached an agreement to limit crude output. OPEC sources said the group reached a deal to cut its oil production for the first time since 2008. 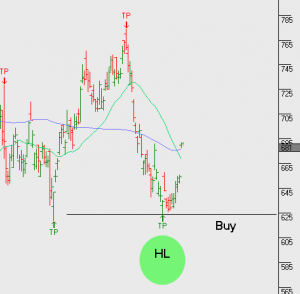 Medibank (MPL.ASX) is now trading at a price level that warrants attention. The stock is forecast to pay a fully franked dividend in FY17 of $0.12, placing the stock on a forward yield of 4%+.

The stock is approaching an oversold level and may see a small bounce, otherwise we’re likely to see sideways consolidation at or $2.50 – $2.60 at which time longer term holders should sell covered calls.

For the trader, deeper selling from today’s price will provide an entry level with a likely bounce back to the above stated target range. 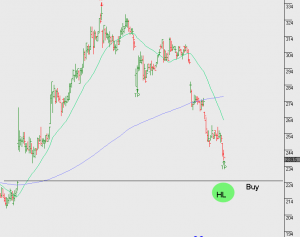 I’ve decided this week to replace the usual multiple individual posts with a quick summary video. I think this does a better job of drawing your attention to where the opportunities are in the market and how to utilise the various Investor Signals’ market commentary services to help enhance your portfolio returns.

Please take the time to watch our quick mid-week video market update so you can keep informed from a timing perspective of the opportunities to focus on.

With global financial markets firmly focused on central bank meetings in the US and Japan last week, it was easy to overlook the bad news delivered to Germany’s largest bank. On September 16th, the US Department of Justice (DoJ) demanded that Deutsche Bank (DB) pay $14 billion in penalties for their role in deceptive marketing practices dating back to 2005. More specifically, the DoJ’s claim is about the way the bank selected mortgages, packaged them into bonds and sold them on to investors.

These bonds are known as residential mortgage-backed securities and very few investors walked away from the DB products without damage.

DB is just one of several banks penalized by the DoJ with Goldman Sachs and Citi-Bank both settling with the DoJ earlier this year for $5 billion and $7 billion, respectively. With that in mind, it’s likely that DB will be able to negotiate a lower number over time. However, over the weekend, German Chancellor Angela Merkel  ruled out any government assistance for DB, which has not only pushed the share price to a 16-year low under €12.00 but also initiated enormous scrutiny on BD’s derivative and financing books.

In short, DB has more than €2.5 trillion of derivative exposure coming due or needing to be rolled over within the year. DB has had a serious reduction in its credit rating by Moody’s and has seen its share price drop 40% since January. The DoJ’s $14 billion demand represents more than 70% of DB’s current market value. Without going into the specific composition of the derivative book, it’s reasonable to believe that DB is probably not on the right side of all of these trades and that refinancing rollovers will put additional pressure on their bottom line.

With respect to the price of the Euro, one must ask the following questions: What is BD’s exposure to other troubled banks in Europe; specifically, the collapsing Italian bank system? And, now that Ms Merkel has ruled out state aid, will BD be able to pay the fine without a depositor bail-in? The ECB chief, Mario Draghi, is scheduled to testify on Monday in front of the Committee on Economic Affairs in Brussels. It’s a fair bet that DB’s stability and exposure will be addressed.

Even without the DB legal mess, the current technical pattern in the EUR/USD looks tenuous. 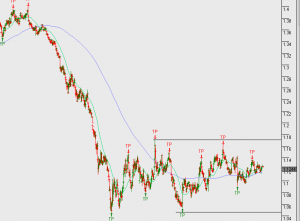 While there was never a consensus that the FED was going to lift the overnight target rate going into last week’s FOMC meeting, there were a couple primary dealers who cautioned that the FED might surprise the market. And while a .25% increase might not have much of an impact on the overall economy, it could have had a significant impact on global equity markets. Remember the sharp sell-off that the SP 500 experienced after the last rate hike in December, 2015. As such, we feel it would be helpful to have some idea of when the next rate adjustment is approaching, so that we could plan our investment strategy accordingly.

One indicator that might give us some insight as to what the FED is planning on doing, as opposed to what it’s saying its doing, is the change in excess reserves held by banks.  As you can see on the chart, the level of excess reserves fell considerably in the weeks leading up to the first step in interest rate normalization late last year. Starting in early November, excess reserves fell by over $200 billion in advance of the FED’s decision to raise short-term rates by .25% in December.

The FED used its reverse repurchase agreement facility (reverse repos) to drain excess reserves by exchanging Treasury securities on its balance sheet for reserves held by banks, thereby removing liquidity in the financial system which is consistent with a tighter monetary policy. Going forward, we believe it’s worthwhile to follow the repo market for signs that excess reserves are leaving the financial system as a signal that the FED is preparing further interest rate normalization later this year.

The BoJ also announced that they would maintain its JPY 6 trillion a year purchases of equity exchange traded funds (ETFs), but widened the distribution to include the broader TOPIX index and Nikkei 400 securities. Both of these indexes, along with the Nikkei 225 gained over 2% on the day and all closed above their 30-day moving averages.

The USD/JPY initially fell to 101.00 before rallying to just under 103.00 and then unwinding back below 101.00 in the lead up to the BoJ press conference. During the press conference, BoJ chief Haruhiko Kuroda stressed that the central bank has ample room to expand monetary stimulus such as deepening negative interest rates and accelerating asset purchases.

Mr Kuroda also said the central bank “would not rule out the possibility of considering new ideas or taking drastic measures if necessary to achieve its 2% inflation target”…….which seems to indicate that they are just making things up as they go along.

The FED’s decision to hold the Fed Funds target rate unchanged was complicated and not unanimous. While FED chief Janet Yellen said the case for normalizing rates has strengthened, the “consensus was not there.” Three regional FED presidents voted to lift rates, which was the largest dissent in three years. In the dot plots, three of 17 policymakers did not see a rate hike this year and it seems like Ms Yellen chose to keep the FED Board of Governors united by standing pat.

In the FED statement, the forward guidance indicated that rates would rise this year provided the labor market continued to improve and no new risks emerged. Some market commentators think this translates into an increased chance of a November rate hike. However, there is no historical precedent for a rate hike one week before a Federal election and the CME Fed Fund futures put the odds at just over 12%.

On balance, we expect the level of Central Bank fatigue to increase in coming months and financial markets to respond to more data driven and technical influences. In this respect, we would expect to see US Labor and consumption aggregates improve while similar data sets in the UK, Japan, Europe and Australia continue to trend lower. As such, our base case is that the USD Index will grind higher towards the 97.00 handle, US stock indexes will remain supported and US yields will have an upward bias. 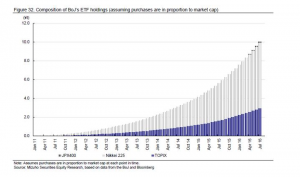 XJO Index Watch – Key Levels you Should be Tracking

Following last night’s decision in the US to leave rates unchanged, yield stocks will begin their recovery as we forecasted. See our list of stocks and entry levels from the post dated the 2nd September for further details on specific holdings.

Our base case is for the market to remain stable and quality oversold names will revert back to higher price levels . In addition, our strategy includes earning income from companies with limited but stable earnings growth using covered calls.

Below, I’ve identified key technical levels to watch in both the XJO and the S&P500 as a mechanism for remaining long the market with a bias toward buy side opportunities. Should the indexes reverse and trade below these levels, we shift our thinking to a more balanced view and begin identifying short trades to help balance the risk in client portfolios.

I’ve used simple numbering 1, 2 & 3, (in charts below), to identify the key breakdown levels that warrant a shift in strategy. To recap, we remain almost exclusively  exposed to long positions, with a balanced allocation across asset classes, and hold around 20 preferred names within the ASX top 50 index. In some cases we’ve allowed 5 – 10% capital growth in certain names over coming months. In other names we’ve sold tight covered calls to maximise the income from dividends and call option income.

If the market reverses through the first of our levels, (indicated by 1), we will start shifting our focus to short signals identified by our algorithm engines; which will then start to neutralise the long portfolio bias. When and if this happens, I’ll update you via the blog, otherwise, we continue to hold our “buy on the dip” position.

For more details you may wish to revisit the monthly strategy video posted earlier this week. 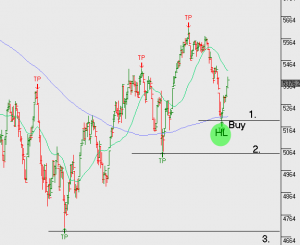 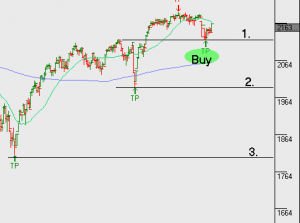 Navitas – Get Ready to Take Profit

Navitas (NVT.ASX)  was recommended as a buy on the 15th August with an entry level at $5.00. The stock has rallied 5% plus, in a back drop of a relatively flat market.

Shift the stop loss to the entry level as a way of protecting capital. Hold the long position open with a target exit price of $5.40. 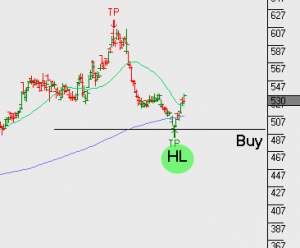 Interesting and worth noting, Qantas has traded lower in the face of a company share buy-back program being announced, record profit, increased dividend and oil prices trading lower. On reflection of these matters, (that should have normally helped the Qantas share price), one could draw the view, that this could be a short worth revisiting on the next bounce or rally higher.

Our algorithm engines will continue to track for future short side signals. 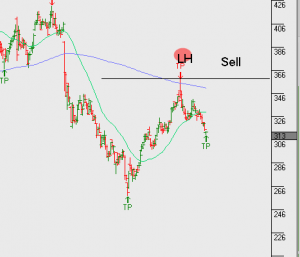