Incitec Pivot operates in explosive/mining services and fertilizers. The stock remains under Algo Engine sell conditions, but we continue to watch the buying momentum and the upcoming earnings result for signs of strength.

We are encouraged by the recent capital raising which has helped to strengthen the balance sheet and should help navigate any short-term COVID-19 volatility.

IPL is raising A$600mn via an underwritten placement and A$75mn via a share purchase plan at a 9% discount to the closing price on 8 May.

IPL’s capital raising is likely to be a positive near-term catalyst as a result of removing the funding risk. Although, we expect downward pressure on commodities to make the near-term operating conditions difficult for both IPL and ORI.

Incitec Pivot was triggered as an Algo Engine buy signal on Thursday 21st November. With an improving outlook for earnings in FY20 & 21 we’re willing to take a closer look at the upside potential.

The short-term technical indicators are about to turn positive and we’re likely to see buying interest pick-up near the $3.20 support level.

We’ll revisit this opportunity as the entry conditions playout next week.

Incitec Pivot reports 1H19 earnings on Monday the 20th of May. We’re expecting the result to disappoint the market and we place our readers on alert.

Queensland floods and plant disruptions will offset any benefit from higher fertilizer prices. If the earnings release is as negative as we forecast, we feel that a buying opportunity will present soon after the announcement.

We see the FY19 issues largely as one-off in nature and there will likely be an opportunity to profit from a recovery in the back-half of 2019.

Keep this one in your diary and look out for next week’s update on the blog. We’ll identify the entry level, post the result. 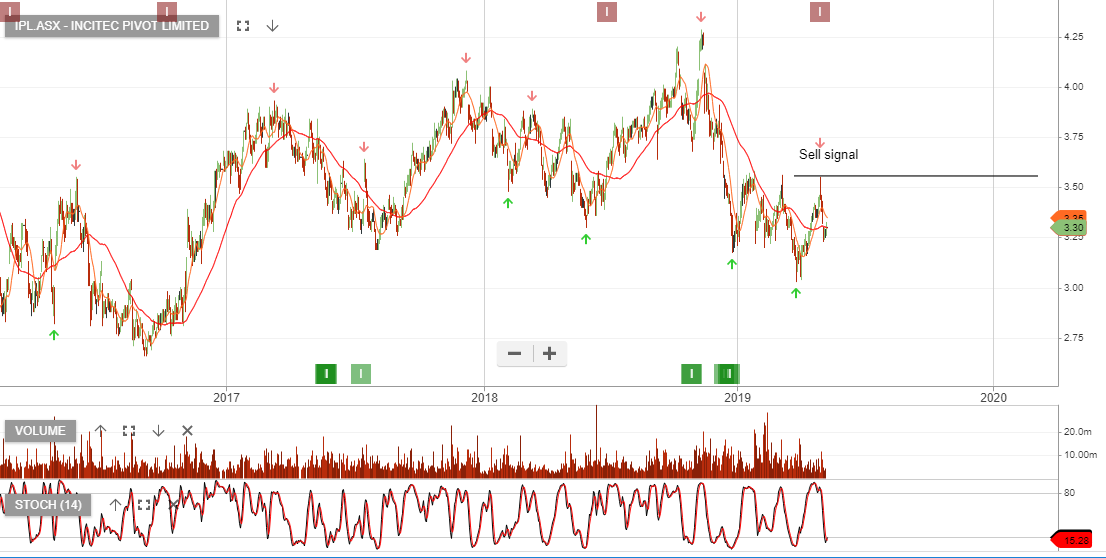 Incitec Pivot is under Algo Engine buy conditions and is a current holding in the ASX 100 model.

The FY19 earnings of IPL will be impacted by the Queensland floods and we’ll see the numbers revealed in the coming weeks. There’s a chance the impact will be greater than current consensus, which may result in short term selling. If this occurs and an opportunity to buy IPL sub $3.00 eventuates, we would consider this a “high conviction” accumulation play. 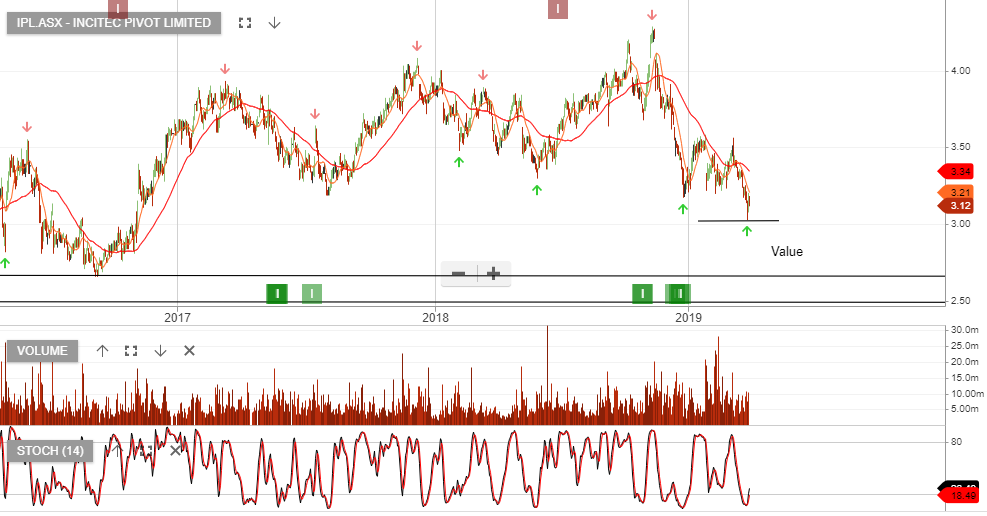 IPL is under Algo Engine buy conditions following the higher low formation at $3.20.

The stock price has been sold off following concerns around the impact of the Queensland floods. In particular, the short term closure of the Phosphate Hill plant and the impact to rail transport.

With the stock now trading 10x FY20 earnings we see much of the downside risks, already priced in.

Incitec Pivot, (IPL) is under Algo Engine buy conditions and despite the earnings impact from the North Queensland floods, we see value for patient investors.

Heavy rainfall in North Queensland has resulted in the shutdown of Incitec Pivot’s Phosphate Hill plant, (closure of the rail line between Townsville and Phosphate Hill).

In mid-2017, our Algo Engine generated a buy signal in IPL and more recently we reaffirmed the entry into IPL when the stock looked to be finding support near $3.40 range.

Since then, IPL has rallied 8% and is now closing in on our $3.70 price target. The short term momentum indicators are also now approaching an overbought range.

IPL goes ex div 5 cents on the 23rd of November. Selling $3.70 September  call options will add an additional 11 cents of income per share. 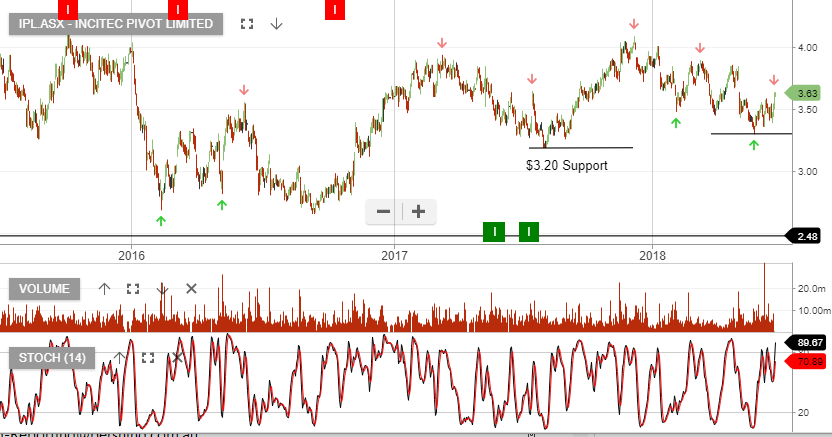 The stock is a current holding within the ASX 50 model portfolio.

This week IPL announced the mitigation to a recent a contract loss, through a new contract with Fortescue.

IPL stated that the FMG contract would mitigate ~50% of the financial impact associated with previously announced contract losses in Western Australia. 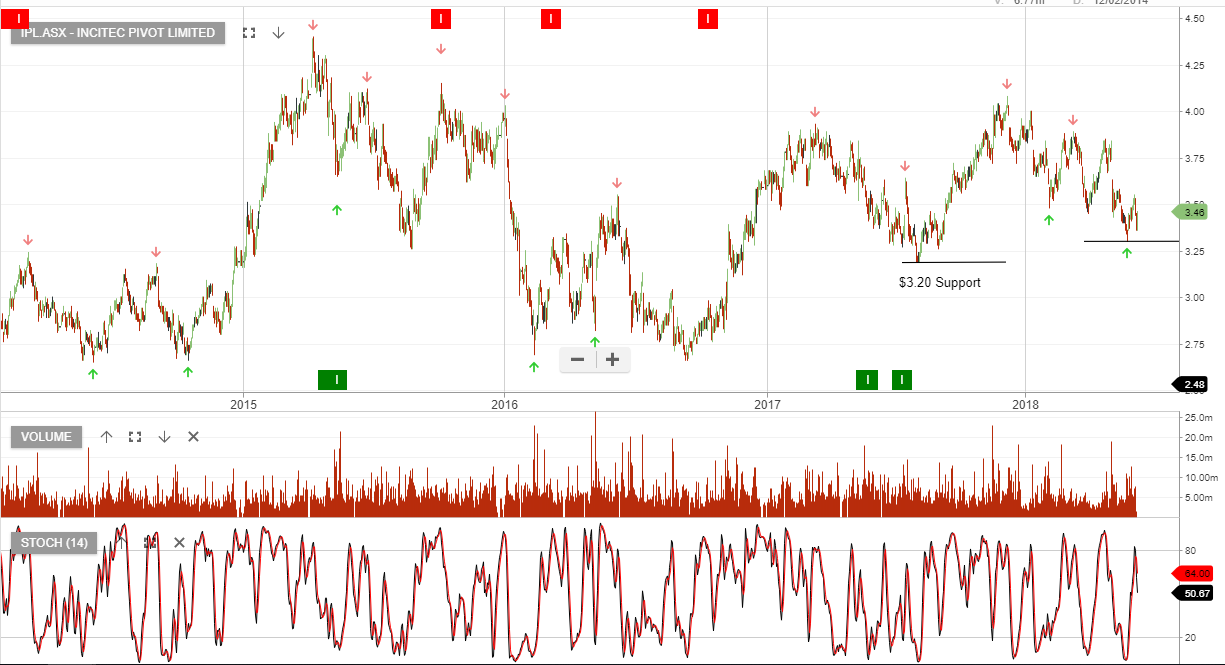 Our Algo Engine generated a  buy signal recently in IPL and the stock is currently held in the ASX top 50 model.

The stock price has pulled back to form a “higher low” at $3.30 and we see forward earnings surprising to the upside, due to the finalization of the Gibson Island gas agreements and the recent recovery in global nitrogen prices.

IPL is also set to recommence a $300m share buyback.