Tabcorp is a low-growth, mature business and is facing a challenging earnings backdrop, with the retail venue closures and an uncertain sports betting outlook.

At 20x FY22 earnings, the stock is also expensive based on historical multiples. The dividend yield appears attractive but is reliant on an unsustainable payout ratio.

We see buying support building for Tabcorp at $4.45.

For more information on the covered call strategy, please call our office on 1300 614 002.

We see buying support building for Tabcorp at $4.45.

For more information on the covered call strategy, please call our office on 1300 614 002.

Tabcorp Holdings, (TAH), 1H19 result showed EBITDA at $360m and 1H NPAT at $132m. These numbers were slightly below consensus. There appears a willingness to reinvesting Lotteries’ based income, into the Wagering business to defend and grow market share.

Cost synergy savings from the Tatts merger was raised to $130-145m, which should help to underpin the stock.

Tabcorp now trades on  a forward yield of 5% and we expect EPS growth to track in the 5 – 6% range.  We note the recent Algo Engine sell signal going into yesterday’s earnings release.

Look For A Bounce In Tabcorp

It’s been estimated that over $250 million was wagered on yesterday’s Melbourne Cup.

It’s reasonable to believe that many punters would have placed bets using one of the TAH platforms.

TAH has been an enigma for investors over the last three months as the share price has traded in a narrow $4.50 to $5.00 price band.

It’s worth remembering that TAH reported a 71% jump in earnings in their last update and is currently priced at a 4.60% yield.

TAH is part of our ASX top 100 portfolio and we suggest accumulating shares at current levels for a move back over $5.25 over the medium-term 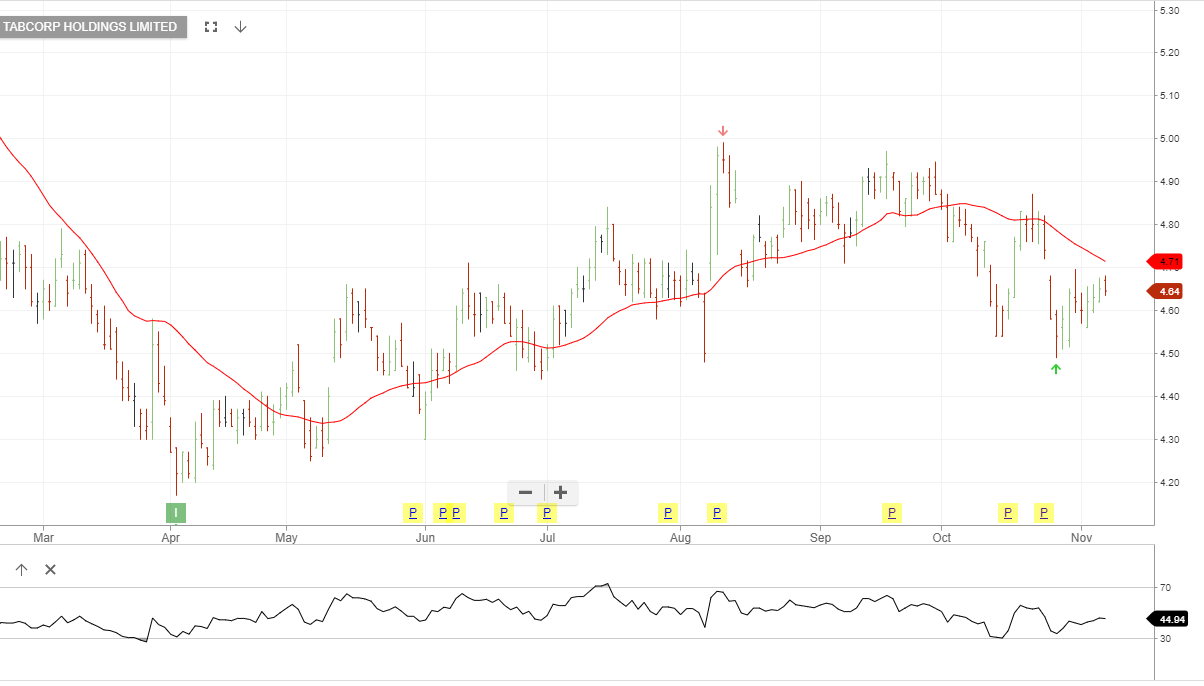 Shares of Tabcorp are noticeably quiet in front of their Investor Day event tomorrow.

With the share price contained in a 10 cent range for the last week, it’s reasonable to expect investors to react to any forward guidance announcements tomorrow.

Our bullish case for the stock is based on continued cost savings from the merged entity and steady growth in the digital gaming sector.

TAH is part of our ASX Top 100 portfolio. We prefer the long side from these levels and look for a near-term upside target of $5.35. 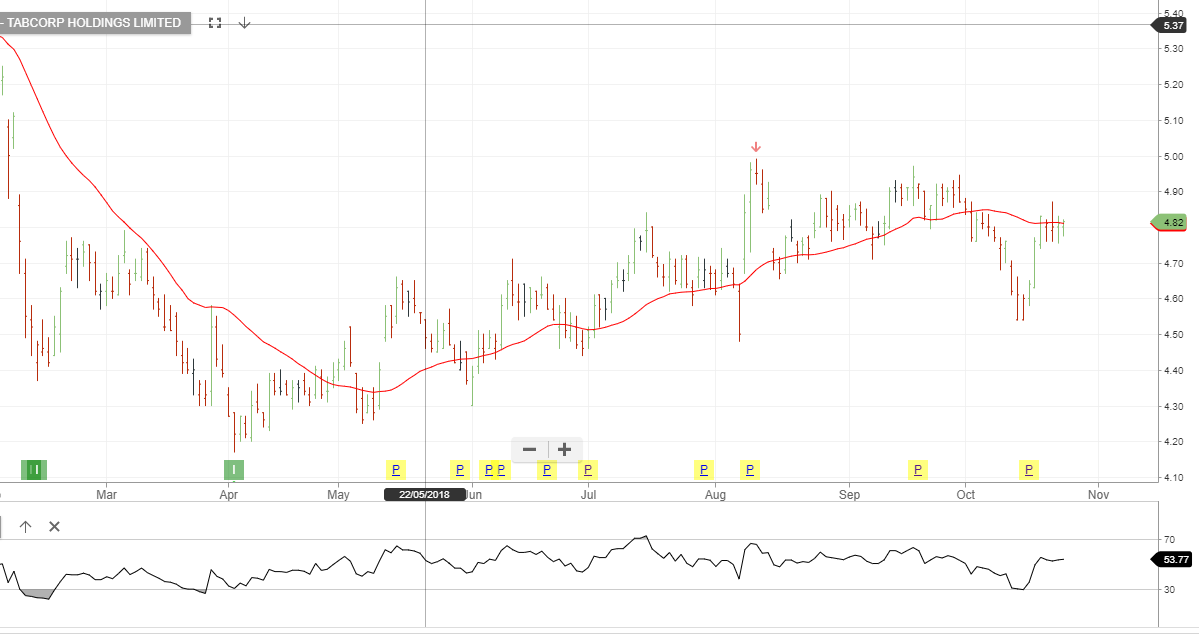 Add To Tabcorp At Current Levels

Shares of TAH have slipped about 6% lower over the last 10 trading sessions.

With their AGM scheduled for tomorrow, we believe is worthwhile to recap some of the company’s performance numbers released in August; this was the first report to reflect the TAH/Tatts merger.

We believe the AGM will be a platform for TAH to announce further synergy savings from the merged entity, new product ideas and increasing revenue in the digital gaming sector.

TAH was added to our ASX Top 100 portfolio in February and our ALGO engine triggered a buy signal in early April at $4.22.

We see good value in TAH at current levels with a medium-term target of $5.40. 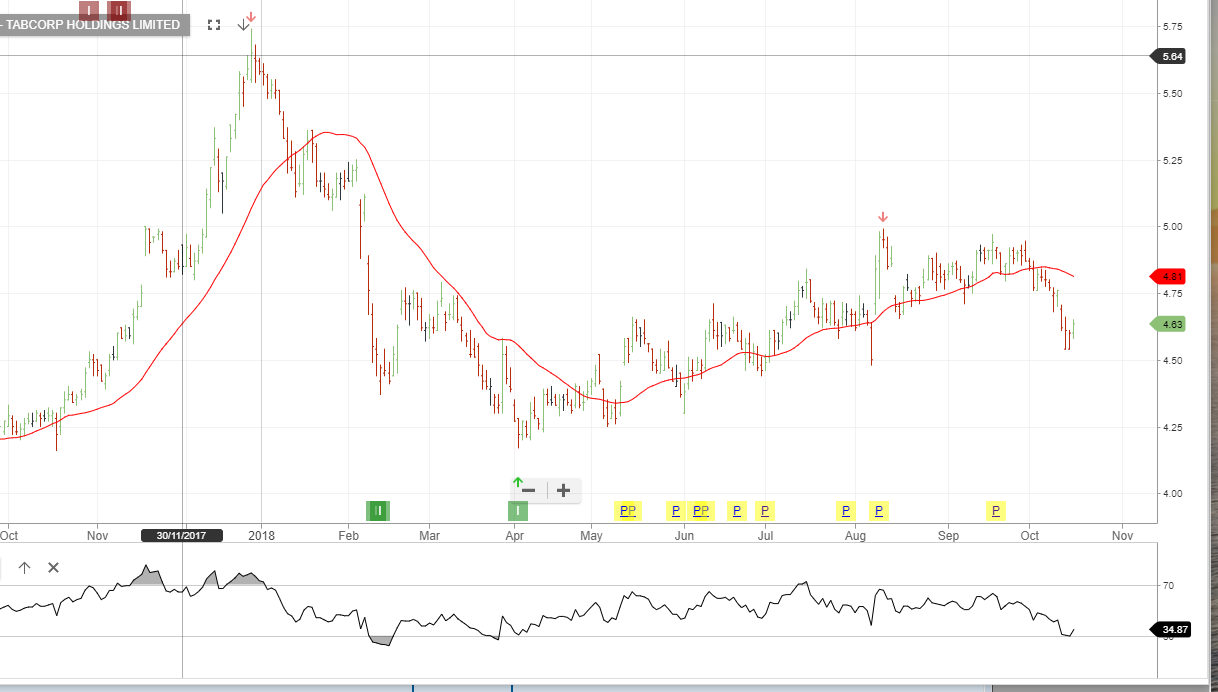 Shares of TAH have been rising steadily since dipping to $4.50 on August 7th.

Recent comments from management in front of their AGM reflect confidence that the company will deliver stronger earnings, dividends and synergies from the Tatts acquisition.

Technically, we see a price inflection point at the $5.00 level which could extend up to the February highs near $5.25. 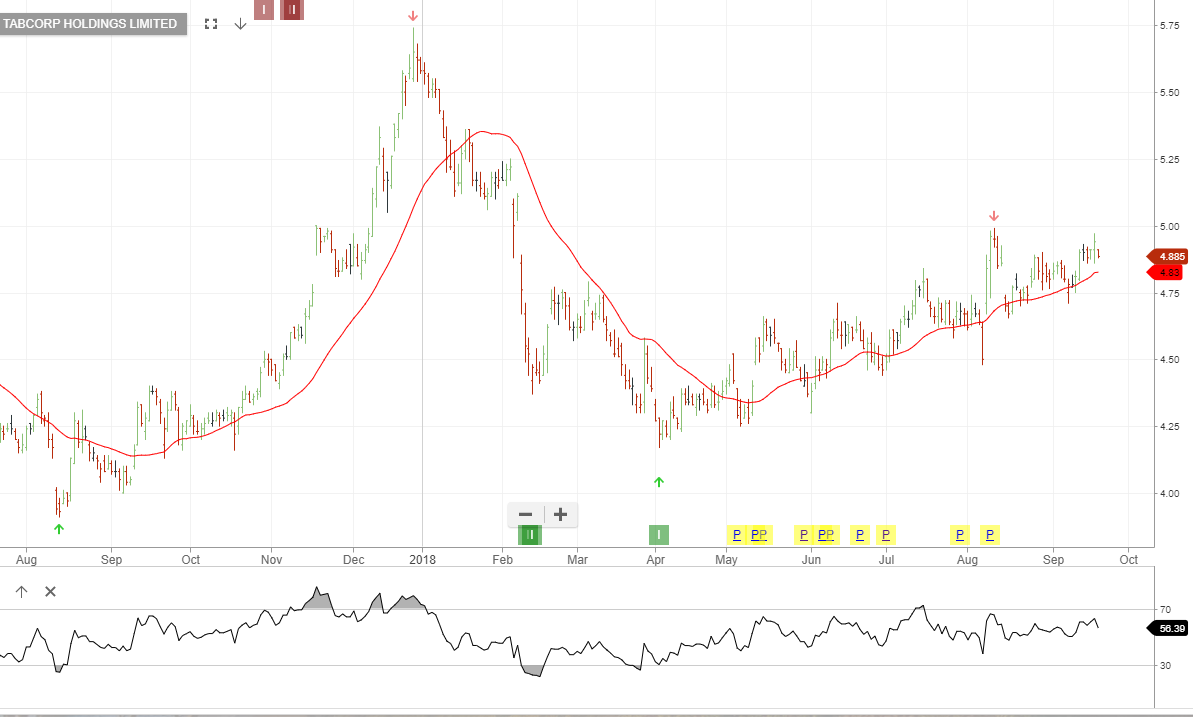 Tabcorp has been a “high conviction” buy idea, following the recent Algo buy Signal at $4.20. The high conviction was based on the benefits of the Tatts merger showing up in the FY18 earnings results.

Stay Long Tabcorp In Front Of Next Week’s Earnings Report

It’s likely that this indecision pattern is due to the upcoming FY 2018 earnings report scheduled for August 8th.

This will be the first report which will include the combined Tatt’s and Tabcorp earnings data.

A recent broker note suggests that the the merged entities will have at least $130 million of synergy savings and has upgraded the stock to “overweight” with a target of $5.20.

Our ALGO engine triggered a buy signal on TAH on April 5th at $4.27 and the stock is included in our ASX Top 100 portfolio. 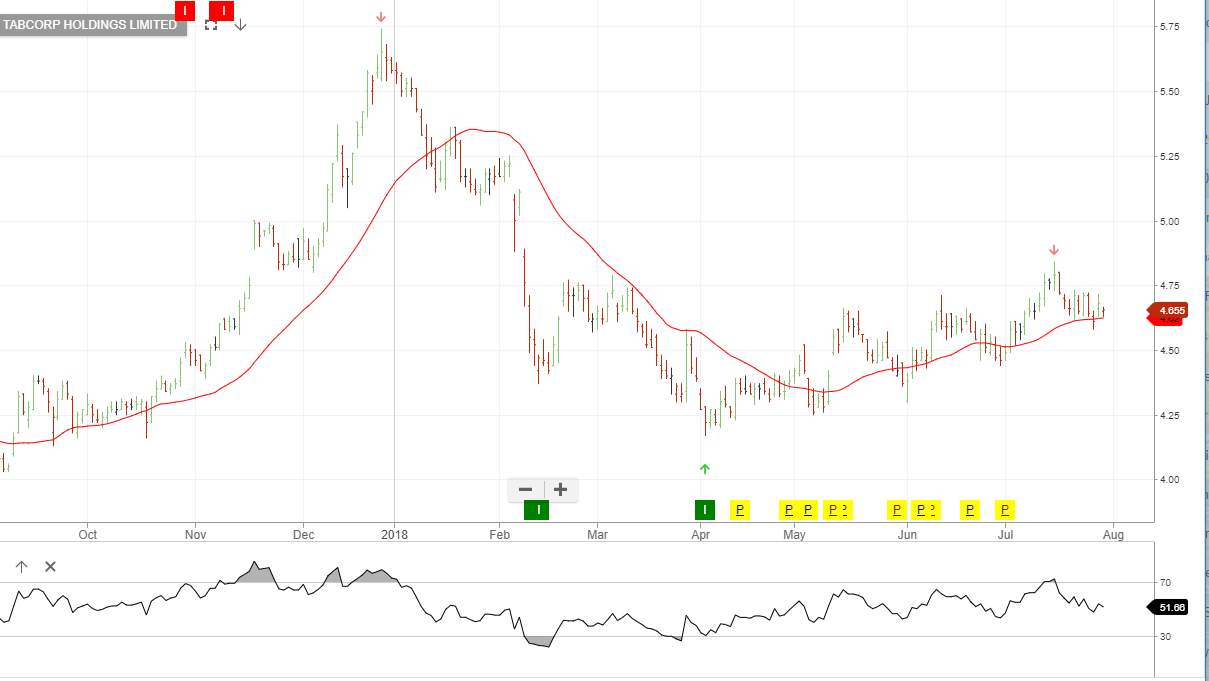