The AUD/USD posted an intra-day high of .7810 on April 19th. Since then the Aussie has dropped over 5% and reached an 11-month low of .7410 during the NY session overnight.

And while the longer-term technical outlook remains negative, the current price action suggests that we could see a modest upside correction over the next week.

We suggest investors holding YANK should take profits at or near $14.40 and look to re-enter in the $13.90 area.

As tensions between the US and China escalate, Australia sits uncomfortably in between its biggest export market and its largest investor.

Government data show that almost 30% of all Aussie exports are sent to China, while the cumulative amount of US investments in Australia is over $850 billion as of the end of 2017.

In addition, US overnight interest rates are now higher than Aussie rates for the first time in over 18 years, and the domestic current account deficit has swelled to 2.2% of GDP

This combination of factors leaves the AUD/USD vulnerable to a protracted down move over the course of 2018.

With the US FOMC raising its Fed Funds target from 1.5% to 1.75% last week, the overnight rate in the USA is higher than the benchmark rate in Australia for the first time in over 25 years.

This removes a key pillar of support for the AUD/USD.

With the RBA firmly on hold throughout 2018 and the FOMC looking to lift rates at least 2 more times this year, we expect the downside pressure on the Aussie dollar to increase.

The AUD/USD posted a 3-month low of .7670 last week as internal momentum indicators continue to point lower. Current chart patterns suggest a test of the .7150 level over the medium-term. 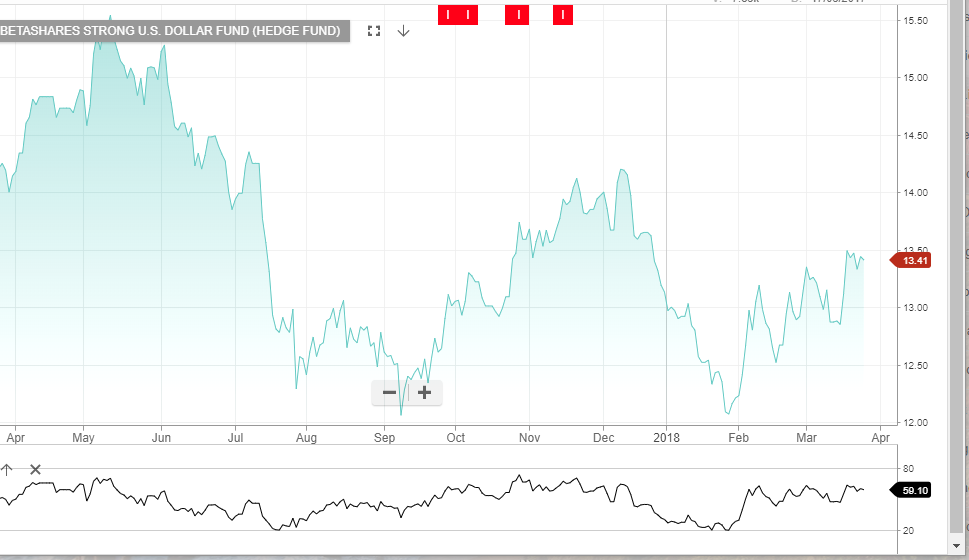 Higher US Rates Pushes AUD To A Two-Month Low

At the time, we noticed that this had a potential for a “double top” formation relative to the .8125 high posted on September 28th.

The Aussie traded down to .7760 overnight and the internal momentum indicators are now pointing lower.

The fundamental reasoning for the recent fall has been the divergence in interest rates between the USA and Australia.

We expect this divergence to continue this year as the FED continues to tighten rates and the RBA remains neutral. At this point, the US 10yrs have a high target of 3.25%.

This estimate is based on the FOMC raising rates 3 times during 2018, which would correspond to the AUD/USD trading back to .7150.

Will The US Tax Reform Destabilize Global Banks?

A key part of the US Tax Reform passed last week includes giving US companies a tax break on profits earned and kept in banks overseas.

As per the legislation, US firms can now repatriate offshore earnings at a tax rate of 15.5%, compared with the previous rate of 35%.

In 2005, the Bush administration had a similar “tax amnesty” when over 50 US firms sent back about $350 billion in profits earned overseas.

In an interview last week, Mr Trump estimated that the total amount of US corporate profits on deposit offshore is between $3 and $5 trillion.

This is a pretty wide spread. But considering that just 5 tech firms (Apple, Microsoft, Google, Cisco and Oracle) are estimated to be holding over $650 billion offshore, it’s clear that the repatriation numbers will be much higher than in 2005.

The most obvious impact of this massive transfer of funds will be the boost in demand for US Dollars. The amnesty plan in 2005 triggered a 12% rally in the USD Index from 81.00 to over 90.00 from March to July.

However, with some EU and Japanese banks already teetering from bad debts and non-performing loans, the short-term implications could be devastating to the banks that have been holding the cash that Mr Trump wants back.

We believe that with just one company like Apple draining $20 billion a month from the European banking system, there will be a negative impact on the health of many EU banks.

At this point we don’t have any clear numbers reflecting the amount of money being held in Australian banks, but we would expect the general strengthening of the USD, on a global basis, will see the AUD/USD retreat back into the lower .7000 handle.

ASX listed stocks which will benefit from the lower Aussie dollar include RHC, QAN, TWE, RIO and NCM.

The AUD/USD has broken down to a 4-month low as local political turmoil combined with general US Dollar strength has the Aussie close to breaking the .7600 support area.

Softer import data from China and dovish comments from the RBA have also triggered investors to exit long AUD positions.

Internal momentum indicators are pointing lower with the next key support level in the .7540 area.

Newcrest Gets A Lift From The Weaker Aussie.

Posted on October 31, 2017 | by Todd
Last week’s production report from Newcrest showed a drop of 5.2% versus the previous quarter. However, the company reaffirmed their full-year production forecast of between 2.4 and 2.65 million ounces of Gold for the year.

Despite the lower quarterly production, and sideways trade in Spot Gold, shares of NCM have gained about 4% from $21.50 to $22.30 over the last six trading sessions.

One of the reasons for this is last week’s 2% slide in the AUD/USD.

NCM sells its Gold on the international market which is priced in US Dollars. As the AUD/USD trades lower, the profit margin on a fixed ounce of Gold increases.

The technical picture has also improved on the stock and we see price resistance near the mid-September level at $23.20. A rally back over $1300 in Spot Gold would likely extend the price range to $23.70.

From a trading perspective, the main numbers to watch this week for the AUD/USD are the Chinese GDP and local employment data on Thursday.

According to the recent PMI readings, labor market activity has slowed and the headline jobs number is estimated to fall from 54,000 to 14,000.

Since posting a multi-year high at .8125 on September 8th, The AUD/USD has been largely driven by comments suggesting the RBA may join other G-7 central banks in beginning to raise interest rates.

If theses two data points show weakness, it’s reasonable to expect the RBA to keep its easing bias and the  AUD/USD to continue its downward trend.

Aussie versus US Dollar

Ansell Gets A Boost From The Lower Aussie

The August low coincided with their FY17 earnings report. Part of that report focused on the level of earnings based in USD and how an stronger AUD could dampen results.

The AUD/USD has now dropped over 5% since trading at .8125 on September 8th. As a result, ANN shares have pushed higher.

As such, we consider ANN a good buy/write strategy up to $23.50 to increase cash flow and enhance portfolio returns.

Since then, the 10-year yields have climbed higher and reached 2.19% in NY trade today. The AUD/USD has traded lower overnight and is testing support at .7980; a break of this level will give scope to the .7910 area.

There are many components of forex pricing but yield differentials will always have the biggest impact.

As such, if today’s domestic employment report posts lower than forecast, we expect to see more downside in the AUD/USD.