APA is under Algo Engine buy conditions and since finding support at $10, the stock has now rallied 10%.

APA is likely to find increased buying support at $10 and trade higher.

Since making the above post on 23 Sept, APA has rallied 8% and the short-term indicators have turned positive.

We continue to see APA as a low-risk opportunity even if the market sentiment was to shift more negative.

APA is likely to find increased buying support at $10 and trade higher.

APA is likely to find increased buying support between the $9.50 and $10.25, supported by 4.5% dividend yield and single-digit earnings growth.

About APA – Our 7,500-kilometre East Coast Grid of interconnected gas transmission pipelines provides the flexibility to move gas around eastern Australia, anywhere from Otway and Longford in the south, to Moomba in the west and Mount Isa and Gladstone in the north. In Western Australia and the Northern Territory, our pipelines stretch thousands of kilometres to supply gas to power major cities, towns and remote mining operations.

Apart from our interconnected natural gas pipelines, we own and operate the Ethane Pipeline which supplies ethane from the Cooper Basin production facility at Moomba, South Australia, to an ethylene plant in Botany, Sydney.

And it’s not just pipelines. We also own and operate the Mondarra Gas Storage and Processing Facility and the Emu Downs Wind Farm in Western Australia, Diamantina and Leichhardt Power Stations in Queensland, the Dandenong LNG Storage Facility in Victoria and the Central Ranges Gas Distribution Network servicing Tamworth in New South Wales.

APA is under Algo Engine buy conditions and provides a defensive yield.

APA is under Algo Engine buy conditions and is a current holding in our ASX 100 model portfolio.

We see price support at $11.00 and reaffirm our “accumulate” rating.

APA is under Algo Engine buy conditions and is a current holding in ASX 100 model portfolio.

NOTE: APA has now rallied over $1.00 and investors can consider taking profit.

APA’s FY18 operating results were ahead of market consensus with underlying profit growth of 6%.

FY19 forecasts suggest low single digit growth with EBITDA guidance in the range of $1.55b to $1.57b.

The ACCC is expected to release a Statement on, or before the 13th September, expressing its preliminary concerns about the take-over by CKI, (offer price$11 per share).

Further price retracement back towards $9.00 creates another buy opportunity here with APA. The stock now trades on a  forward yield of 4.5%

The CKI consortium has completed its due diligence and has now entered into a binding Implementation Agreement to acquire 100% of APA’s stapled securities for an all cash offer of $11.00 per share.

The offer is still subject to a number of conditions including approval from the ACCC and the FIRB.

Following the recent takeover offer for APA at $11 per share, (subject to FIRB review), we  see a reasonable risk/reward opportunity to buy both APA and SKI.

A soft backdrop for global bond yields should provide downside protection as investors seek out defensive yield opportunities. Added upside exists in APA if the takeover is given the green light by regulators. 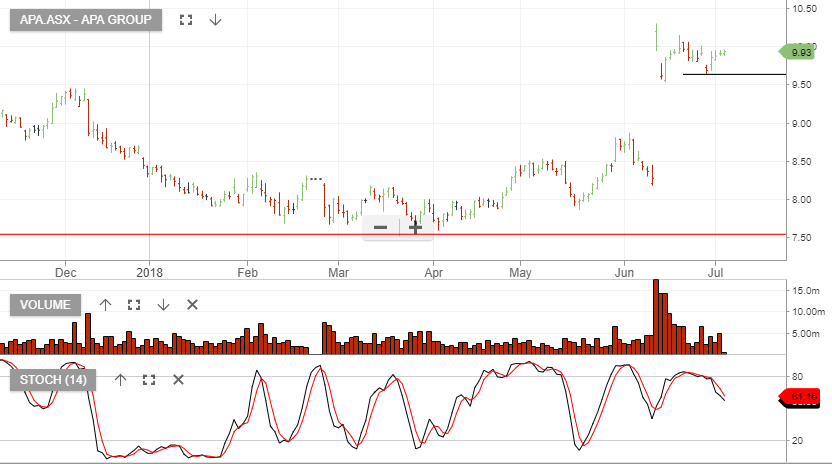