AGL Energy is a under Algo Engine buy conditions and is a current holding in our ASX 100 model portfolio.

AGL announced FY19 underlying NPAT of $1,040m and lowered FY20 guidance to be A$780-860m. The forecast is below already adjusted market estimates and we’ve seen the share price trade lower as a result.

With the stock at $19 there is value supported by a 5% dividend yield. This trade is an example where investors should look to add a covered call option to enhance the yield to 10% per annum.

AGL Energy is now under Algo Engine buy conditions, following the recent sell-off from $23 down to $20.50.

We recommend buying AGL and selling an out of the money call option to enhance the income return.

XJO – The 5941 Level Is Technical Resistance

The XJO has formed a “lower high” pattern within the existing Algo Engine buy signal structure.

The market has rallied 6% from the recent buy signal but we’re now mindful of the recent break of the “higher low” structure, as circled on the chart below.

5941 is resistance for the XJO and whilst the market remains below this level, some caution is required. 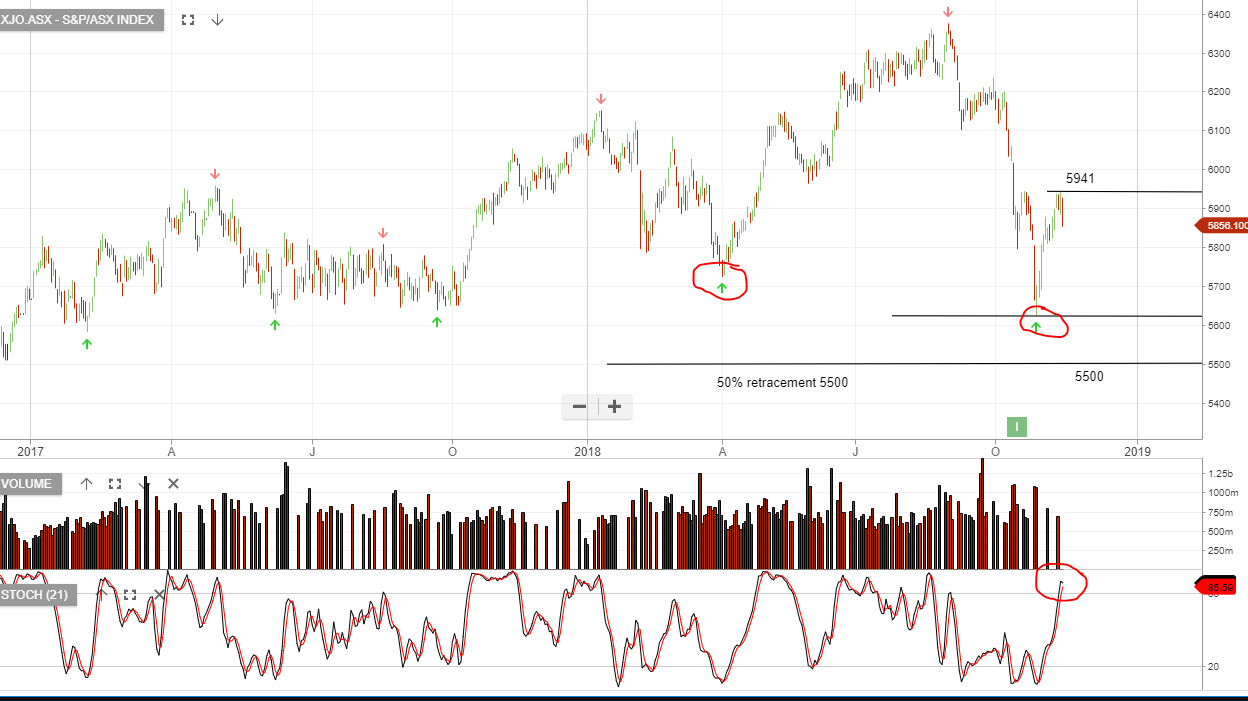 AGL is a current holding within the ASX Top 50 and 100 model portfolios.

With the share price trading at $19.50, we consider a pessimistic view is now priced in.

We suggest buying AGL and looking to sell covered call options to enhance the cash flow.

With moderate earnings growth into FY19 and the regulators looking to intervene in retail electricity pricing, it is hard to see where the uplift in the share price will come from.

With the stock on a 5.5% forward yield and limited downside risk, we consider AGL a suitable buy-write opportunity for portfolios. Through adding a $22 call option we’re generating 10 – 12% annualised cash flow. 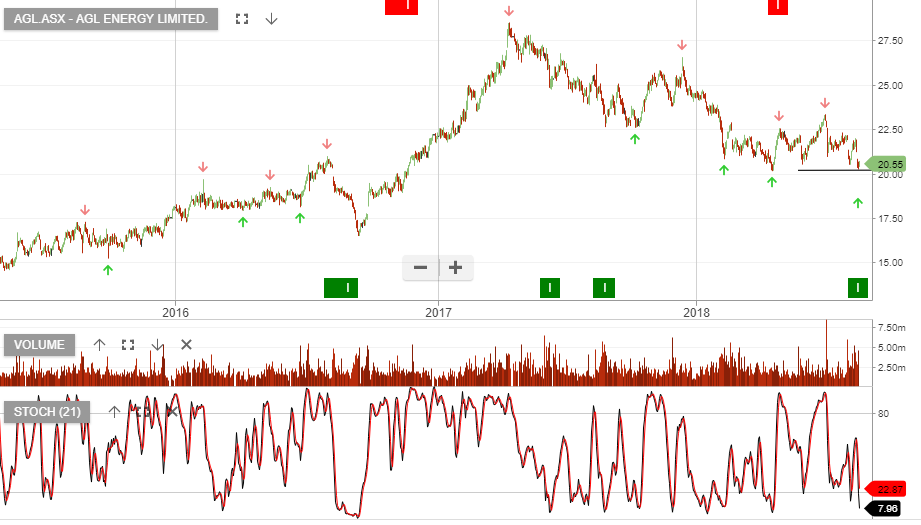 Shares of  AGL have lost more than 6% over the last two sessions after a mixed full-year report was released on Thursday.

The top line data was impressive as the energy generator announced net profits surged to $1.6 billion, which is almost three times higher than the previous year’s profit of $539 million.

However, a large part of the increase in profits came from a $562 million gain on electricity derivative contracts, a segment of their business which lost over $250 million in 2017.

Along these lines, AGL indicated that based on a fall in the forward price curve, it expects wholesale prices (and their margins) to decline into 2019.

On balance, while the overall full-year NPAT beat most estimates, the downbeat forward guidance has weighed heavily on the stock price and points to lower levels over the short-term

The next key technical support level is in the $19.50 area, which would represent a 2-year low. 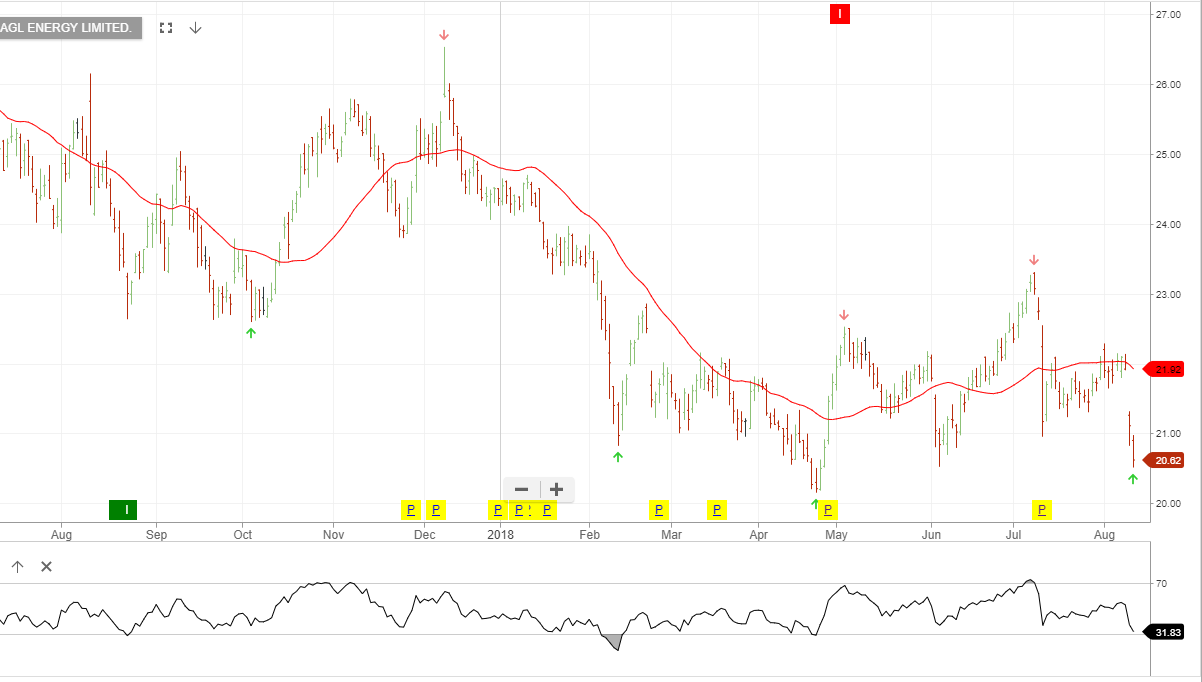 At the time, we suggested selling  $23.00 call options into September, so investors would receive increased cash flow as well as the 54 cent dividend on August 23rd.

Performance reports from both the Loy Yang A and Bayswater facilities have failed to generate strong buying interest and we remain neutral on the stock.

Daily charts suggest the next level of support for AGL is near $21.35. 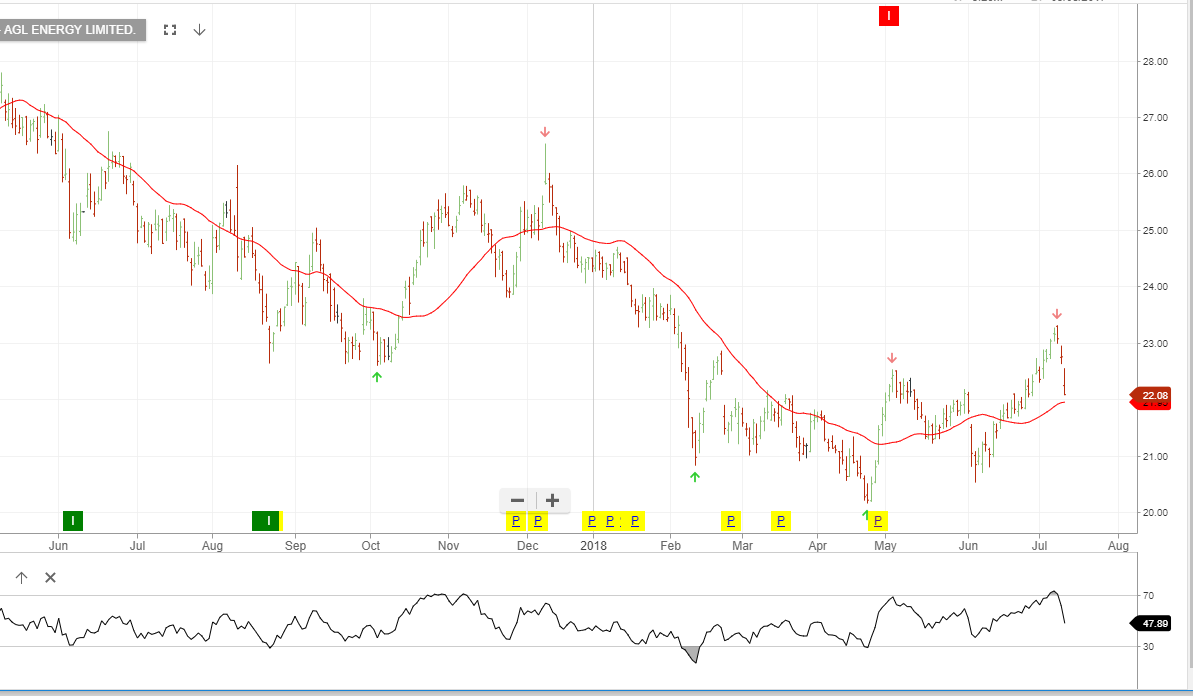 Our Algo Engine triggered a recent buy signal in AGL and, with the stock price finding support at $20.50, we recommend investors add long exposure.

As the US yield curve flattens, which is caused by the long-end of the curve no longer increasing at the same rate as the shorter-end, we’ve started to see institutional money flow back into ASX listed yield sensitive names.

Our preference among these, within the property sector is GPT, SGP, and WFD, (based on valuation grounds).

Within Utilities and Infrastructure, we continue to like AGL, SYD and TCL. 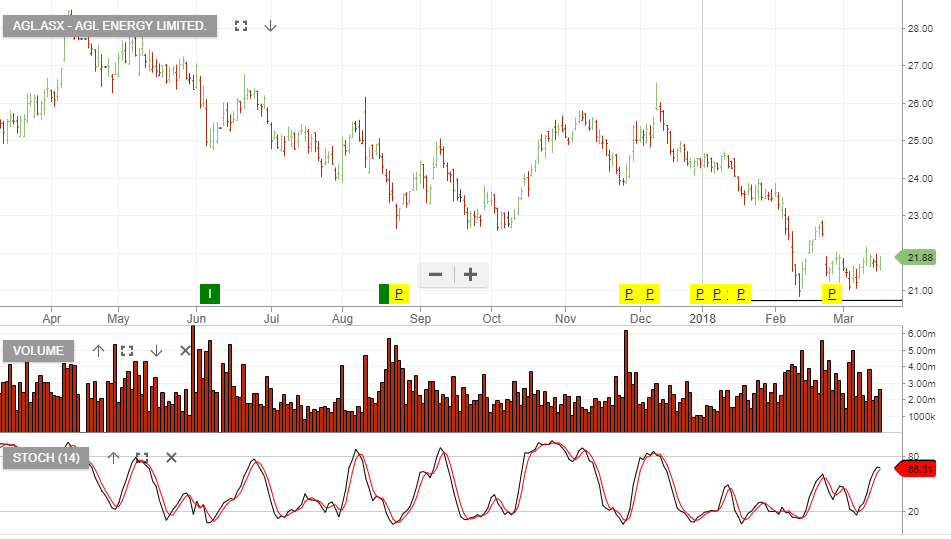 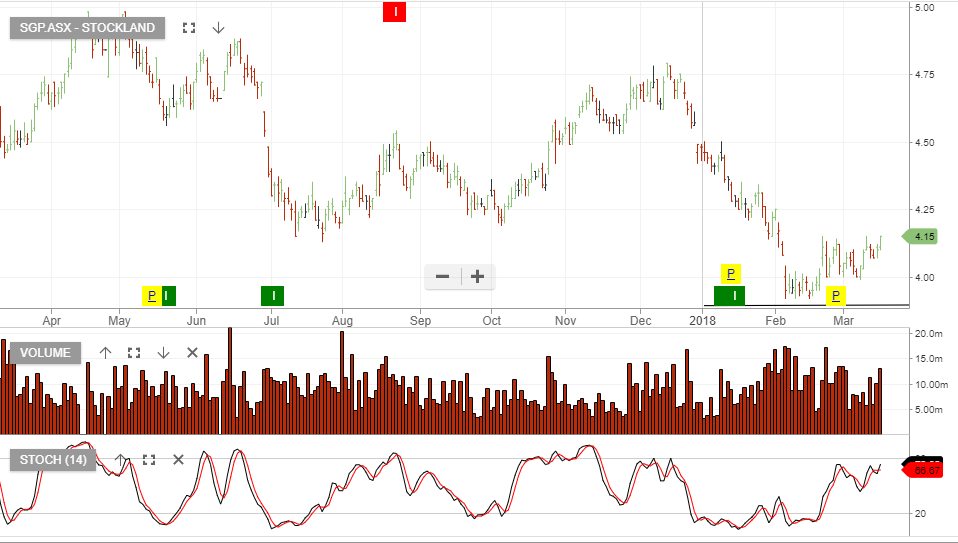 AGL shares are oversold and investors should buy the stock and look for a recovery into the $23.50 range.

Selling covered call options into May or June will help to enhance the yield, whilst waiting for the next $0.50 forecast divided payment in August. 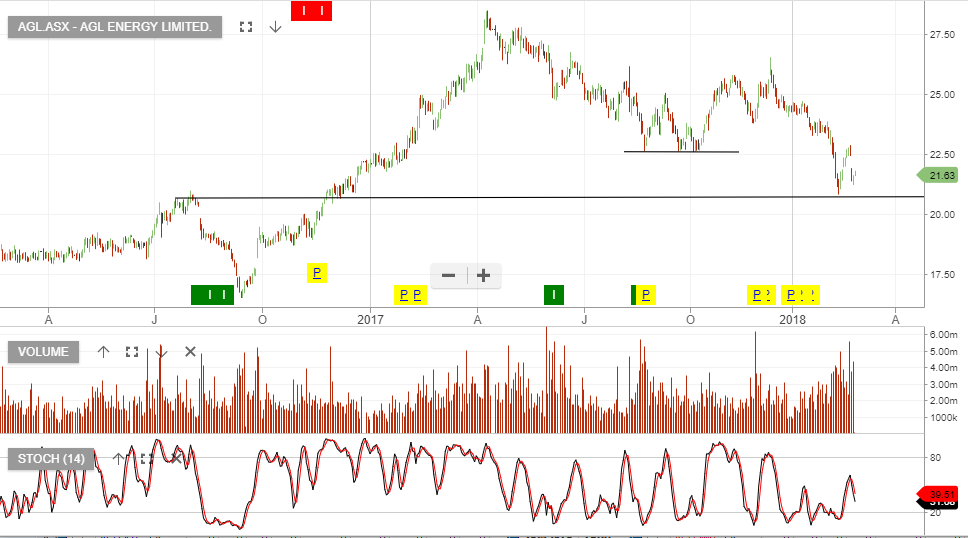