US stocks ended lower on the day after a sharp, mid-session reversal was triggered by comments from the US Federal Reserve.

It was reported that during the last FED meeting, when rates were lifted by 25 basis points, some voting members viewed US equity prices as “quite high relative to standard valuation measures” and that the central bank should take steps to begin trimming its $4.5 Trillion balance sheet.

The DOW 30 posted its largest intra-day downside reversal in 14 months. After an early gain of almost 200 points, the DOW closed down 41 points and near the session low.

Volume was very heavy at 7.5 billion shares compared to the average volume of 6.5 Billion shares over the last month.

It’s worth noting that the process of reducing the balance sheet acts as an accelerator to tightening monetary conditions and is generally not bullish in an over valued market. 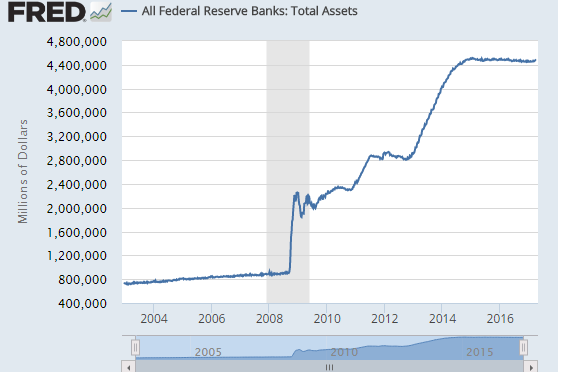 In remarks earlier today, Fed President Janet Yellen indicated a readiness to raise the US funds rate at the FOMC’s March 14-15 meeting.

In fairly explicit language, she said that as long as “employment and inflation are continuing to evolve in line with expectations”, “a further adjustment of the federal funds rate would likely be appropriate”.

As a result, we now see a hike at the March meeting as close to a done deal, and see the market probability raised to 95%.

Considering the fact that the Fed Funds futures contract was reflecting a probability of around 30% just over a week ago, this has been a very sharp turn in policy sentiment.

In typical market conditions, a US rate hike is Bullish for the US Dollar and Bearish for Stocks, Commodities and Crude Oil

US Wages and Inflation

The US Federal Reserve officially ended their stimulative policy of Quantitative Easing (QE) on October 29, 2014.

Since then, investors have been following the monthly Non-Farm Payroll (NFP) report for insight about how the condition of the US Labor market would influence US interest policy, the US Stock market and the US Dollar.

Within the NFP report, the three main components are the headline new job creation, the un-employment rate and weekly hourly earnings.

For most investors, the headline new jobs data has been the key metric for gauging whether the FED was likely to lift rates or leave policy on hold.

However, as the US is reaching a full-employment zone and the unemployment rate is nearing its lower bound below 5%, we are seeing a change in the policy implication dynamic towards wage growth and its impact on inflation.

The FED understands that US wage growth is feeding directly into core inflation aggregates and will likely  shift their policy-making focus away from new job creation to wage growth during 2017.

In last Friday’s NFP report, wages rose .4% for a new cyclical high on a year-on-year basis to 2.9%. This is the fastest pace since 2009. We see the importance of the wage component increasing through the year as the knock-on effect into core inflation is seen in subsequent data sets.

In other words, as we move further into 2017, it’s reasonable to expect investors may be taking positions in the US stocks, bonds and the US Dollar based more on the growth of weekly wages than the number of new jobs created.

On balance, we consider the recent rise in wages as a transitory event which may trigger short term headwinds to the recent stock market rally. Over the longer-term, we still consider the Bull market in stocks to continue with a gradual rise in 10-year yields.