Over the last 6-months, the price of Spot Gold has been capped just below the $1370.00 level three times.

With the current price around $1350, the question now is: will Gold be capped again, or will it break over $1370 and head higher?

Looking at Friday’s Commitment of Traders report offers an interesting perspective. The numbers show that the speculators are long and the commercial accounts are very short.

As a rule, since the commercial accounts actually hold the Gold, they are more likely to cover their short exposure quickly.

As such, we see a growing likelihood that Spot Gold will trade back over $1370 for the first time since July 2016, over the medium-term.

This extension of the recent rally will lift local mining names such as NCM, SBM, EVN and SAR. 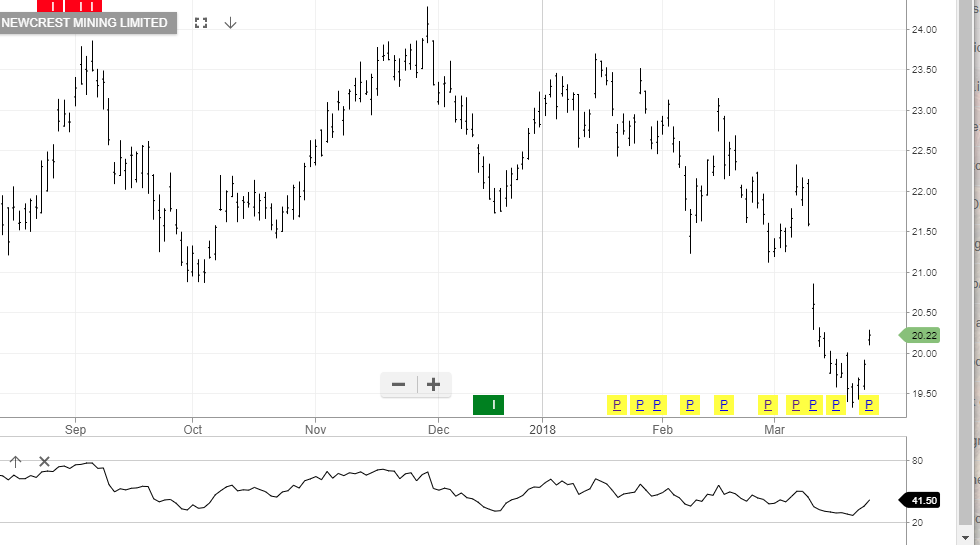 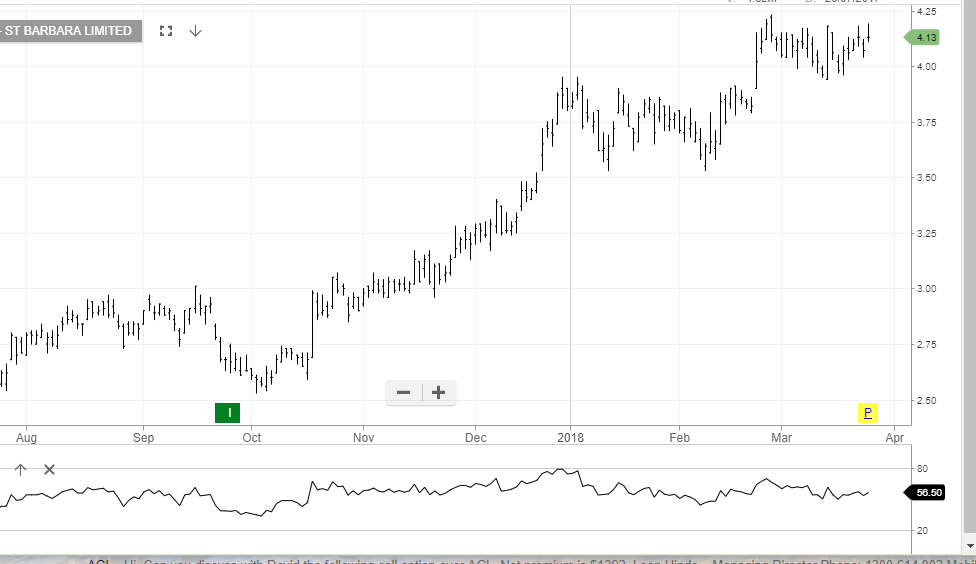 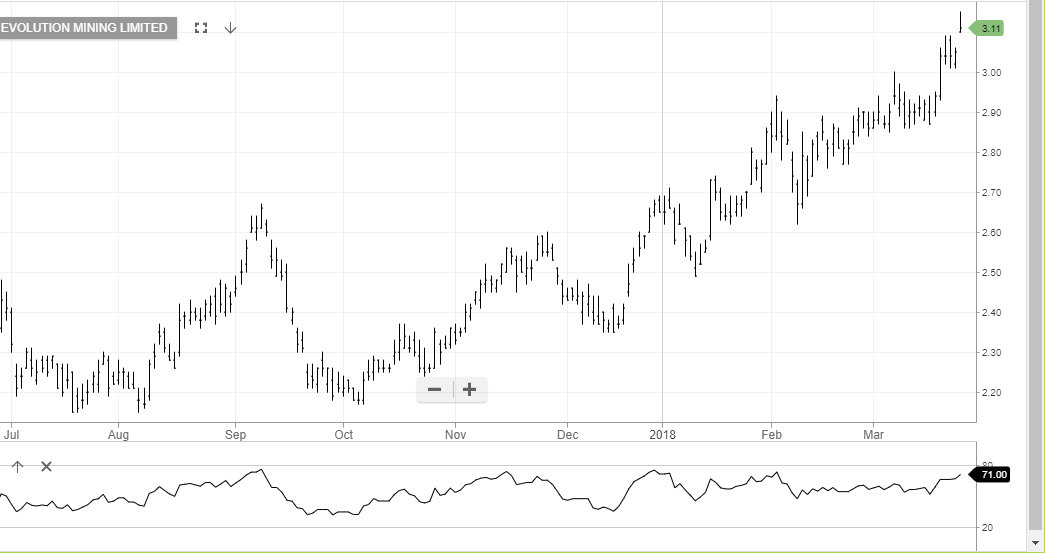 As global markets become more concerned about the impact of US tariffs and the escalation of trade disputes, the price of Spot Gold has firmed back to the $1340 level in late NY trade.

Our preferred local gold stock to buy is Newcrest, which has recovered smartly from the $21.20 low last week to reach $22.20 in early trade today.

The correlation between Spot Gold and NCM has been around 70% over the last 6-months.

The production numbers announced by NCM were broadly inline with market expectations and the correlation with Spot Gold remains intact.

The mining giant reported Q2 gold production of 613,000 ounces, which is a 17% increase quarter-on-quarter. The cost of production slipped slightly to US 830.00 per ounce.

Technically, the share price remains tightly correlated to the price of Spot Gold. 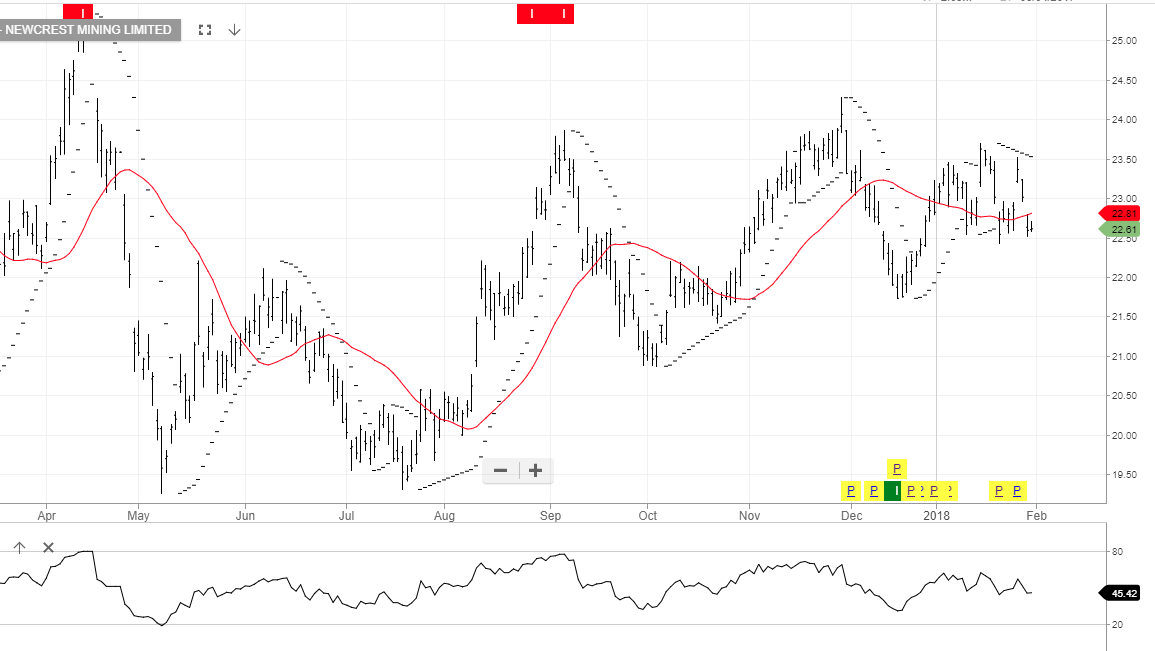 The ASX XJO Index fell 1.1% for the week and traded below the 6000 level for the first time this year.

Iron Ore prices posted their first weekly loss in over a month, which pressured shares of mining giants BHP and RIO Tinto lower for the week.

Internal momentum indicators are looking fairly neutral on the daily charts, which suggest the index could see range trading next week between 6070 and 5985.

The yellow metal traded as low as $1324 in yesterday’s New York session, which suggests the technical correction is likely to extend the downside range.

We see the next significant chart point at $1309 but wouldn’t rule out a test of the $1292 area over the near-term.

On a longer-term horizon, we are bullish on Gold and will look to buy shares in the domestic Gold producers at lower levels.

On January 4th, we flagged the potential for a bearish correction and suggested that investors take profits in Newcrest mining near the $23.30 area.

NCN reports its Quarterly Production numbers on January 30th. It’s reasonable to expect shares of NCM, as well as the smaller producers, to closely follow the spot price of Gold into these production reports.

We added NCM to our ASX Top 50 model portfolio on December 13th at $22.10. We will look to buy back into the sector as the correction in spot Gold runs its course. 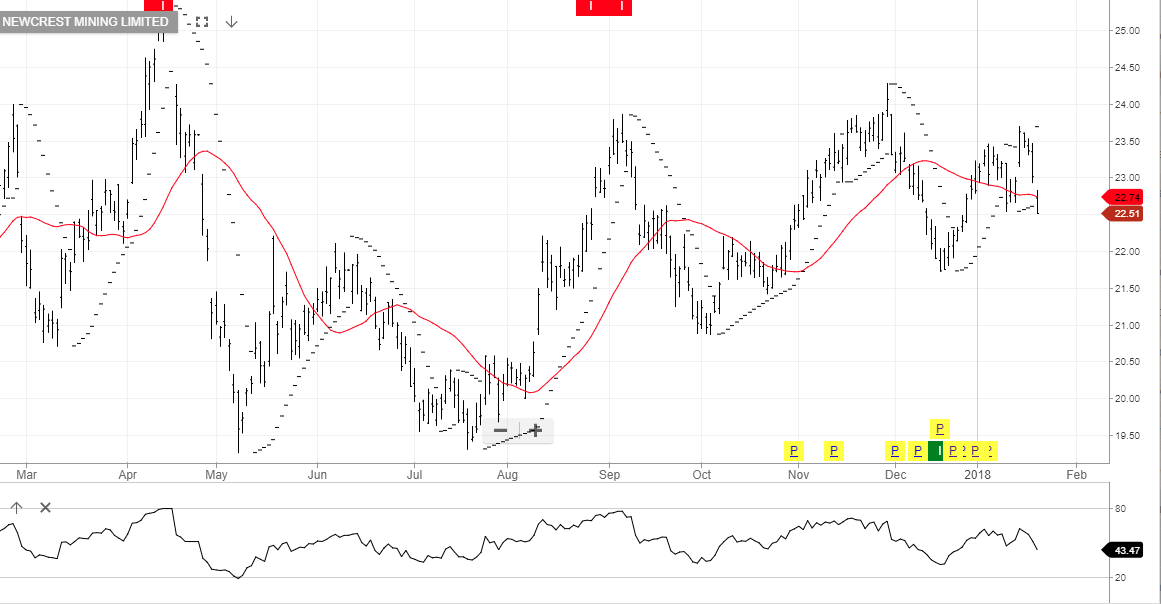 The Perth Mint reported sales of 46,415 ounces of Gold during the month of September. This is more than double the 23,130 ounces sold in August.

The Perth mint refines over 90% of newly-mined Gold in Australia and ships to investors world-wide.

As illustrated in the chart below, this trend in higher demand could indicate higher Spot Gold prices in coming months.

As mentioned in a previous blog post, Gold has rallied after the Chinese Golden week for the last four years.

This year, the yellow metal has traded $25.00 higher since the Chinese market has been back online and is now over $1300.00 per ounce.

At this point the local Gold mining names haven’t rallied in the same percentage terms as spot Gold. However, we consider this price lag to be temporary and to see higher share prices in the near-term. 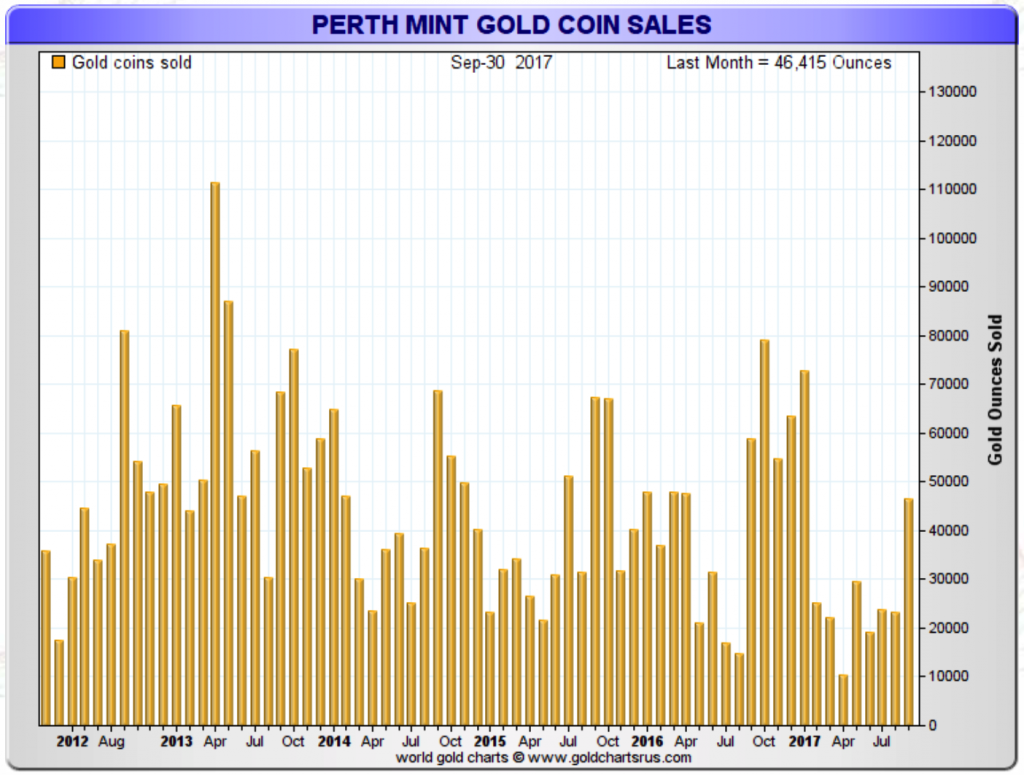 A few weeks ago, we posted a report outlining the correlation between the Chinese Golden week holiday and the price of spot Gold.

Over the last four years, the price of Gold has dropped into, and during, Golden Week and then traded higher once the Chinese markets came back online.

We continue to look for Gold to trade higher into the end of the year and re-test the the $1350.00 level.

As such, we like long positions in NCM, EVN and SAR. 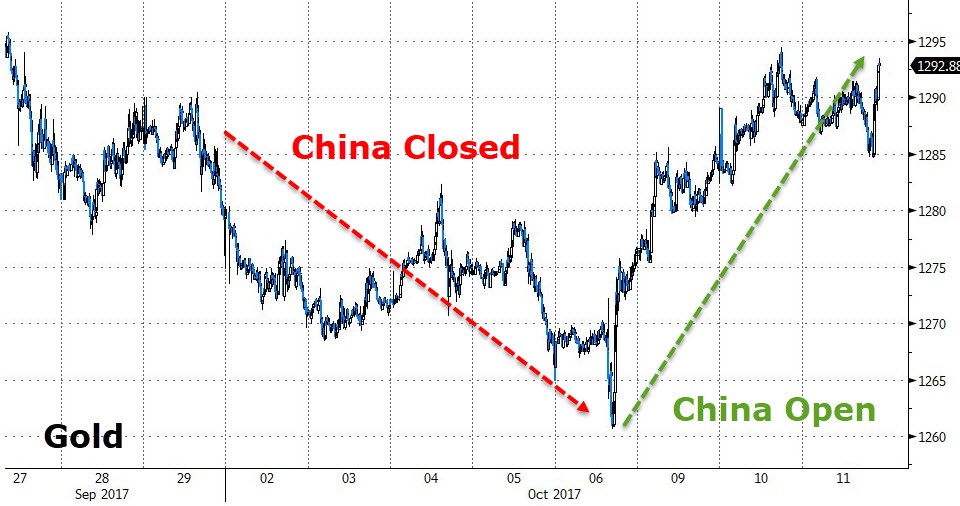 Shares of Newcrest are trading lower in early trade as the company went ex-dividend today.

Shareholders will be paid a 9.5 cent dividend, fully-franked, which we expect to increase over the next 6-month period.

The share price has found good buying support in the $22.00 area in recent sessions and we consider the $21.80 to $22.00 levels a reasonable buy zone.

In addition, we have noticed a “higher low” pattern in Evolution Mining (EVN). Our ALGO engine has not yet triggered a buy signal and we will update when that happens.

With a positive base case for spot gold moving higher, we would look for the domestic gold mining sector to improve into year end.

This marks the 3rd straight week of higher prices and internal momentum indicators are now pointing to the June high of $1295.75.

However, share prices of local gold miners NCM and EVN have not reflected this stronger trade in the spot Gold price.

Both NCM and EVN announced positive quarterly production numbers last week, and we expect both names will break out their recent ranges on the topside. 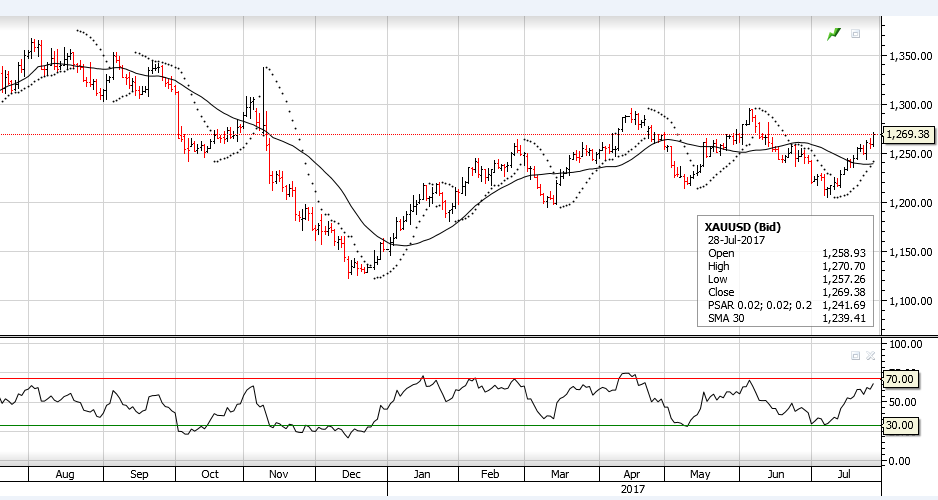 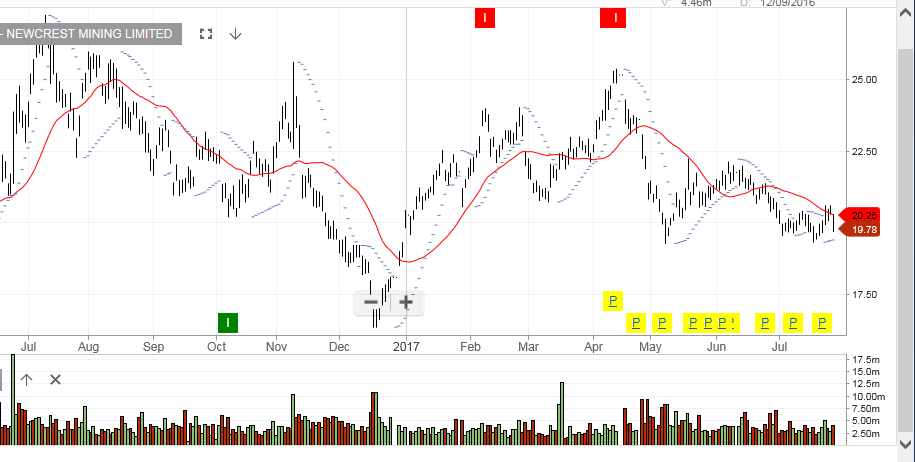 Has Gold Found A Bottom?

The closure of the Cadia mine has had a multiplying effect on the share price; which was already feeling the pressure of lower spot gold prices.

The daily chart patterns in both Gold and Newcrest are showing technically oversold conditions. At current prices, we consider both assets good value for a medium-term reversion trade to $1260 and $22.75, respectfully.